Introducing our December 2021 client of the month, Rob.

I first started training Rob in the spring of 2021. What initially struck me was how he enjoyed a challenge. Due to this determination to succeed and achieve targets, Rob is our natural choice for the December 2021 client of the month.

In Rob’s words, “2021 was about getting into the rhythm and making weight-training a habit”.

After a few lifting sessions, Rob became interested in building aerobic fitness to compliment recent strength gains. Conveniently, Rob has a Concept2 rower in his garage.

Dragging the dust cover off the rower, and after a few splutters from the dust, I went through some of the basic technical points of rowing efficiently, effectively and injury free. Fortunately, Ellie, his wife, is an ex-rower, so there are no excuses for poor rowing technique!

And as a result from chatting to his brother-in-law and cousin about his new regime of rowing, cycling and weight training, a new rowing challenge was created. The fastest over 5km on the rower.

Since this initial challenge, Rob has increased his training to counteract the quick scores being posted by his competitors. The challenge is ongoing so racing tactics, training programming and periodisation of training are being formatted into the programme.

And dare I say, a healthy diet to complement the workouts.

At 45 and with a ‘dodgy’ knee from playing squash, a desk job and in his own words, “zero self-motivation to lift weights”, Rob found himself in a physical doldrum.

His ever-encouraging wife sent Rob my details after reading about the benefits of regular weight-training and the positive impact on well-being. And as Rob is a financial trader, she thought I would be a perfect fit for Rob’s ‘number-oriented mind-set’.

Rob confesses that he is “no great athlete and up until last year, my most regular exercise was kicking a football with my 6 year old son.”

His greatest sporting achievement was beating the GB pool captain at pool (the sport with balls on a table rather than lots of water) which in his words “says it all.”

He’s run a few marathons and has achieved a personal best of 3 hours 41 minutes! That’s actually some going and proves Rob does have a good aerobic engine, despite self-criticism of athletic prowess. Oh, and he has played a few games of National League Hockey. 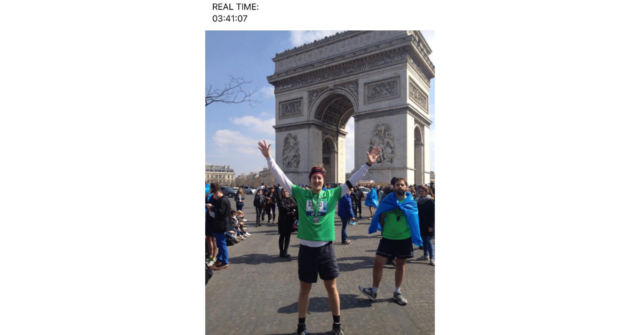 So despite Rob’s belief that he isn’t athletic, I beg to disagree. The man is a natural sportsman.

Rob has enjoyed the benefits of weight training over the past 8 months. Two years ago, he had a knee operation to repair damage cartilage. Recently, he has been able to play squash which he loves. This is due to the strengthening exercises through weight training around the knee, leg and hip.

His sitting posture is also stronger despite hours working at the desk and his 5km rowing personal best has improved to below 19 minutes and 30 seconds having never previously beaten 20 minutes. The new target is 19 minutes 15 seconds even though Rob is secretly pushing for sub 18 minutes 30 seconds. Softly Softly Catchee Monkey!

And in his own words, “I even have the odd visible muscle on my upper body”.

“After 8 months, I am very happy with where we’ve got too so far and am very excited to push upwards and onwards into 2022 with some more ambitious goals.

When my younger and fitter cousin in Australia heard that I was going under 19 minutes 30 seconds for 5km, he decided to lay down a proper challenge. Having never sat on a Concept2 rower before, he’s now had 4 attempts at 5km and is down to 18 minutes 32 seconds” exasperates Rob. 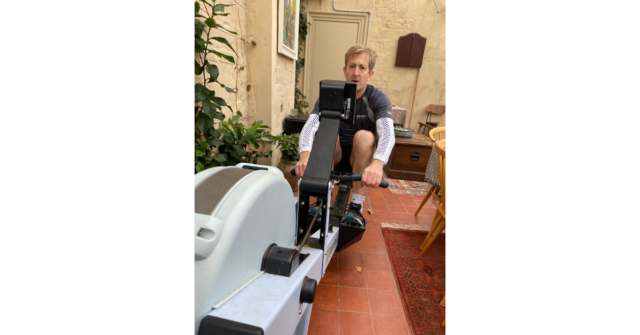 Training for a faster 5km

So we are setting new achievable small goals on the rower and on the lifts.

And a new rowing regime of steady state endurance and speed work will help the 5km rowing time.

Incorporating exercise into an already busy lifestyle is difficult. Rob works full-time and has a family with three lovely children. However, he has managed to block off times each week which he dedicates to exercise.

Once recovered, his energy levels increase which enables him to spend quality time with his family and improve work efficiency. A win win solution.

But it does help to have a personal trainer turn up at your house. “I’ve found it harder to wimp out of a gym session when there’s an instructor with his van parked at my house!” says the December 2021 client of the month. 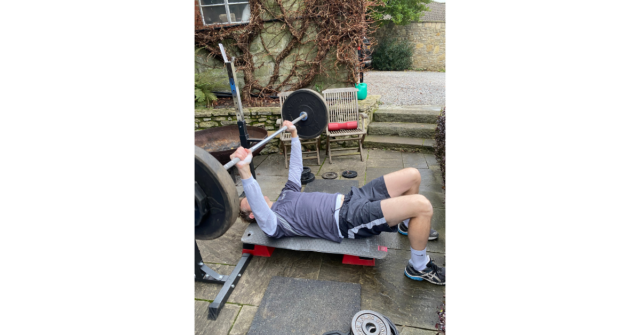 Powering his way to December 2021 client of the month

And he can take holidays guilt-free so he can fully emerge himself with his family for the duration of the break. “That’s one of the brilliant things about Tony – I can let things go with a family holiday and zero exercise for a fortnight but then we just take a few kilograms off where we were before and start climbing the mountain again” says Rob.

Rob’s summary of last year was “hugely pleased”. He has increased strength sessions to twice weekly. In addition, there are two aerobic workouts either on the rower or bike.

Our December 2021 client of the month is reaping the benefits of regular healthy exercise with his consistency of training.

Extra sleep also helps the body to metabolise fats efficiently. Again, it’s all to do with the hormones and exercise.

But, unfortunately for Rob, he is a Tottenham Hotspur football fan and his stress levels are constantly raised due to his under-achieving football team. There are some things that even a personal trainer cannot help!

Well done Rob and congratulations on your fitness and strength achievements and winning December 2021 client of the month. Shame about the shirt! 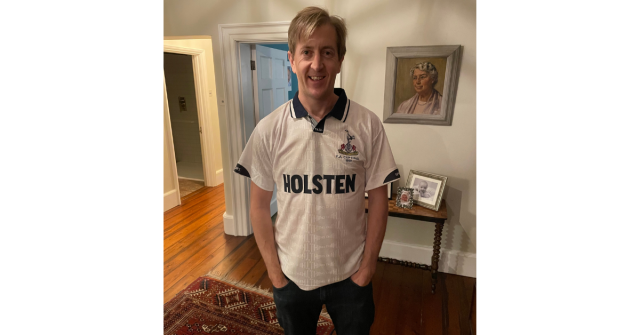